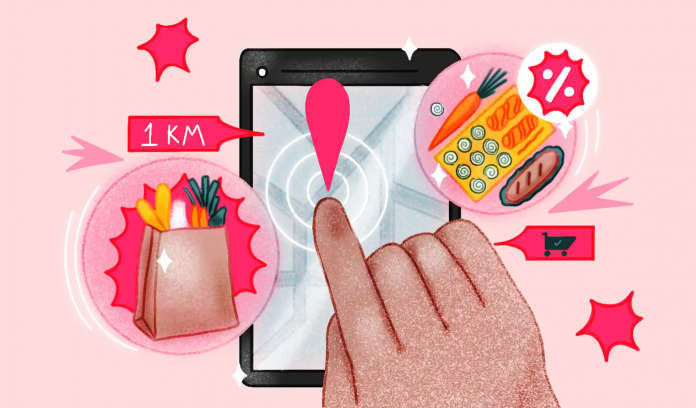 If food waste were a country, it would be the third-highest greenhouse-gas emitting nation behind the US and China. That’s because 40% of all food grown in the world goes uneaten each year, according to a World Wildlife Fund report from last year. And when food ends up in landfills, it produces huge amounts of greenhouse gases.

So it’s no surprise then that apps designed to combat food waste – by giving consumers the opportunity to purchase leftover, expiring or misshapen food at discount prices – have become increasingly popular in recent years. Some of these apps have millions of users in the US, and are growing internationally. TikTok users often post videos of the food they have salvaged from restaurants through the apps, and a Reddit community with more than 12,000 members shares photos of their hauls.

Food waste happens at many points along the supply chain – from spoilage on semi-trucks to overproduction on the farm – and food waste experts note that those losses are only compounded the further food gets from its source. While developers hope that their apps will give consumers – who are responsible for about half of food waste – an opportunity to signal to retailers what they’re willing to buy – experts warn that true change will require systemic policy changes.

“It takes a village to solve a problem like this. And it’s not going to be one solution that does it,” said Josh Domingues, founder and CEO of the Flashfood app. “It’s going to be a collective combination of people that have really good intentions that work together.”

Basch agrees, adding “our only competitor is the bin”.

Users of the Too Good to Go app can search for local restaurants, bakeries and grocery stores – and purchase surprise bags filled with whatever remaining bagels, pad thai or groceries were left over at the end of the day. The bags range in price from about $3 to $5, but they’re stocked with food about three times that value – so customers are also getting a steep discount.

Too Good to Go first launched in Europe in 2015 and opened in the US in October 2020. Today it’s available in cities including Austin, Chicago, Los Angeles, Seattle and Philadelphia, and Basch says the app saves 300,000 meals a day from ending up in landfills around the world.

Besides saving meals from ending up in the trash, Too Good to Go’s primary aim is to increase awareness of food waste, eventually encouraging consumers to effect policy change in their local communities.

“The whole food chain is wasting food. So we need to help,” said Basch. “But for us, starting with the consumers and raising awareness with a super simple app that anyone can download and start using today was really the opportunity to make a difference for us.”

Other apps focus more specifically on food waste that occurs at grocery stores.

Shoppers can be picky – reaching for only the reddest apples or the largest onions. But Misfits Market has staked its name on the hope that they can also be whimsical – appreciating an oddly shaped squash or a fasciated tomato. While grocery stores often toss out, or decline to even purchase, “deformed” produce, Misfits only sells ugly fruits and vegetables that others might not want. Buyers can select from a variety of primarily certified organic and non-GMO products, which Misfits sources directly from farmers and then mails out in subscription boxes at 30% to 50% less than retail price.

One of Misfits’ main aims – besides combating food waste – is helping shoppers who live in food deserts access fresh produce, by mailing it to their door. Although Misfits doesn’t yet operate in all 50 states, it announced earlier this summer that it would be acquiring the similarly named Imperfect Foods, allowing it to reach customers in more regions.

Meanwhile, Flashfood is an app that allows customers to buy expiring food from local grocery stores at reduced prices. Domingues, who launched the app in 2016, started researching food waste when his sister called him after catering an event where she’d had to throw out $4,000 worth of food at the end of the night. At the time, Domingues was living in a condo above a supermarket and wondered: how much food did it throw out every week? The answer, he learned, was on average $5,000 to $10,000.

There’s something about Flashfood that’s not unlike digging through the discount bin. The aim, Domingues said, was to make that process more accessible to today’s shoppers by putting it on their phone. To date, Flashfood has partnered with more than 1,500 stores in Canada and the US – mostly in the north-east and midwest – and has diverted 50m lb of food from landfills.

“What we wanted to do was give consumers the ability to show the change they wanted with their wallets, and that’s had a huge impact,” said Domingues. “We’ve saved shoppers tens of millions of dollars in grocery bills.”

But some experts warn that apps alone won’t solve the food waste problem.

Although food waste apps “do facilitate increased connection and communication”, they don’t “address the root causes of wastage and the need to change inefficient practices”, Tammara Soma, assistant professor and research director of the food systems lab at the School of Resource and Environmental Management at Simon Fraser University, said in an email.

“It’s hard for apps to tackle serious issues around poor policies and practices,” she said. “These apps can help with reducing or diverting food waste at one stream,” like at the farm, store or restaurant, “but it is not clear whether or not the final product will always be fully consumed by consumers or if they will end up going to the bin anyway.”

When scholars talk about food waste, they’re really talking about two things. “Food loss” – waste that happens upstream, from the farm all the way to the front door of the grocery store – and “food waste” – losses that occur downstream, from the grocery store shelves to the kitchen (or restaurant) table. The “true cost” of food loss and waste doesn’t just include the food itself, Soma said, but all the labor, transportation, water and other resources that go into getting it to consumers.

That’s why, “the consensus by food waste scholars is that we need to target prevention”, she said, minimizing food loss at the source so that it doesn’t have the chance to waste more resources later. “However, prevention is not easy because this is where we need to challenge the current food system that results in inefficiencies and overproduction.”

In a paper published last month, Soma analyzed a different kind of app – one that attempts to reduce food loss from the farmer’s side. The open access farm management app, called LiteFarm, was designed to help farmers better track their harvest and sales, to get a basic sense of how much food they were losing. But Soma and her co-author found that farmers were actually able to use the app to plan their plots and schedule workers, thereby not only tracking but preventing food loss. Other apps, like Crisp, are working to collect similar data to help retailers lower their waste.

Soma hopes that food waste app developers consider ways their software can stem losses at the source. “It would be interesting to explore opportunities to use these apps to better facilitate local food procurement and direct markets in general,” she said. “Shortening the food supply chain and connecting producers and consumers may help transform our relationship to food and those who grow our food.”

… we have a small favour to ask. Millions are turning to the Guardian for open, independent, quality news every day, and readers in 180 countries around the world now support us financially.

We believe everyone deserves access to information that’s grounded in science and truth, and analysis rooted in authority and integrity. That’s why we made a different choice: to keep our reporting open for all readers, regardless of where they live or what they can afford to pay. This means more people can be better informed, united, and inspired to take meaningful action.

In these perilous times, a truth-seeking global news organisation like the Guardian is essential. We have no shareholders or billionaire owner, meaning our journalism is free from commercial and political influence – this makes us different. When it’s never been more important, our independence allows us to fearlessly investigate, challenge and expose those in power

Published By: The Guardian

Mining For Diamonds Is Comparable To Finding Good Managers